This is what you can do with GarageBand for iPad in about 2 hours:

I wrote this song for the purpose of trying GarageBand for iPad this evening. I used vocals, guitars and virtual instruments in ways that I believe most people would use them, and I capped the project at two hours. 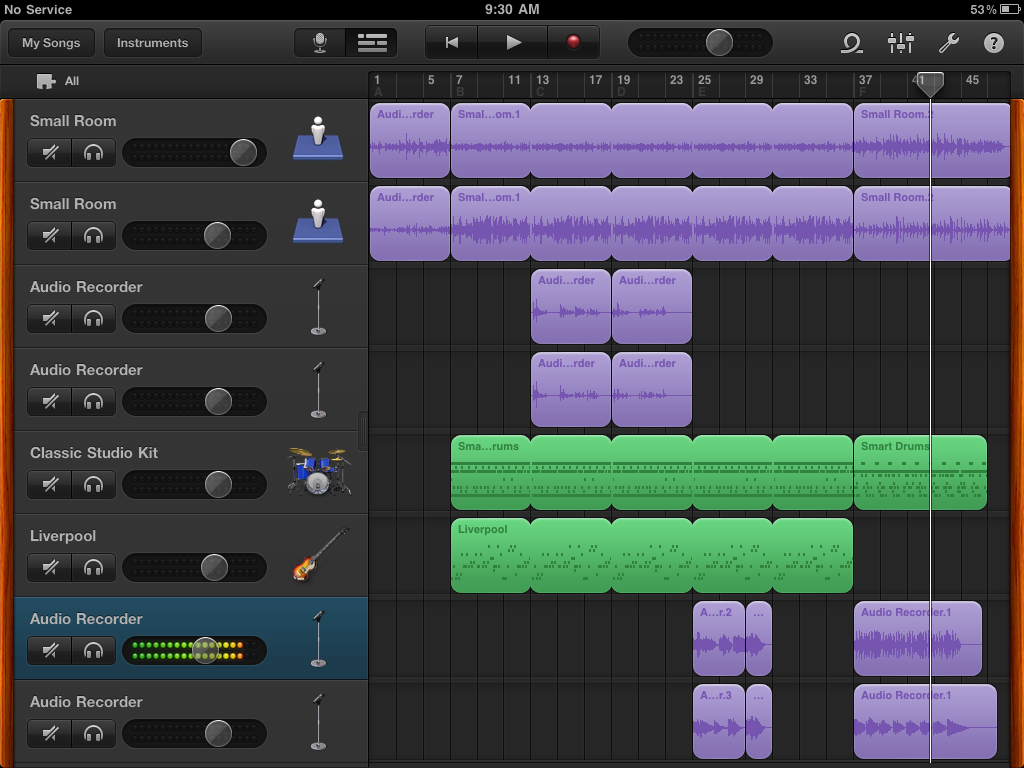 The two acoustic guitar tracks are panned about 75% left and 75% right. The left is strumming chords; the right is alternating between chords and arpeggiated notes. I chose the “small room” preset for both to provide ambiance.

The two vocal tracks are separate takes of the same lines, panned about two thirds left and two thirds right. This process provides a full sound without requiring any unnatural reverb (Elliott Smith is perhaps best known for using this technique; John Lennon and Bon Iver have also employed it).

The two electric guitar tracks are panned about 60% each way. These are not virtual instruments; they are real electric guitars played through a Fender Pro Junior amp. I struggled to maintain a consistent volume because even at 15 watts my Pro Junior was too loud for the iPad’s internal mic. I got the levels manageable with a makeshift damper made from tissues.

I created the virtual bass lines by plucking individual strings from chords in the selected key. Non-musicians will appreciate this method because they can improvise without the risk of playing out of key. Musicians, and particularly composers, will find this limiting. There were a couple times when I wanted to create dissonance, and had to change the key in order to pluck an intermediate semitone. 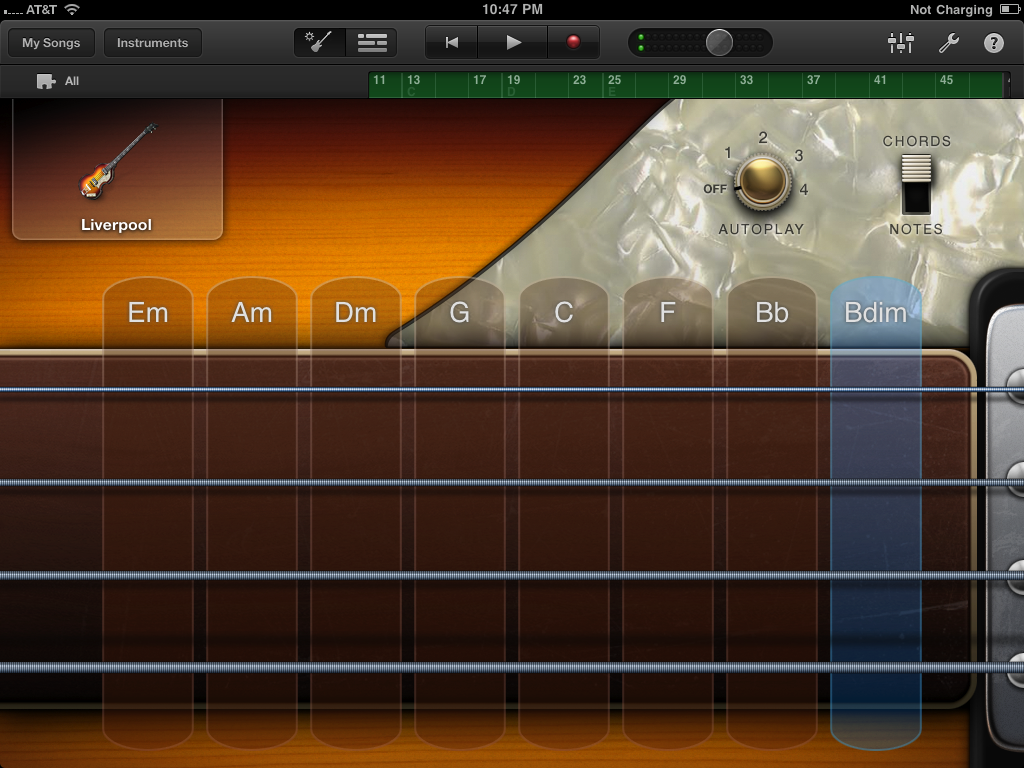 The virtual drumkit is by far the most fun part of creating songs. GarageBand provides two ways to lay down your beats:

The first is a clickable drumset that plays the drum you tap at the time you tap it. Overdubs are allowed within a single track, so you can focus on one drum per take and get the timing right. If you have a specific drumbeat in your head, this is the method you’ll need to use to translate it for the virtual drumset. GarageBand lets you quantize virtual instruments (up to the nearest 64th note), so you can stay on rhythm even if your hands aren’t perfect.

The other means of entry is a grid onto which you place drums. The grid ranges from simple to complex and from quiet to loud. If you want to experiment with beats or just get a rhythm down to record with (metronomes are boring), this is the quickest way to get up and running. You can also click the die to generate a random beat. 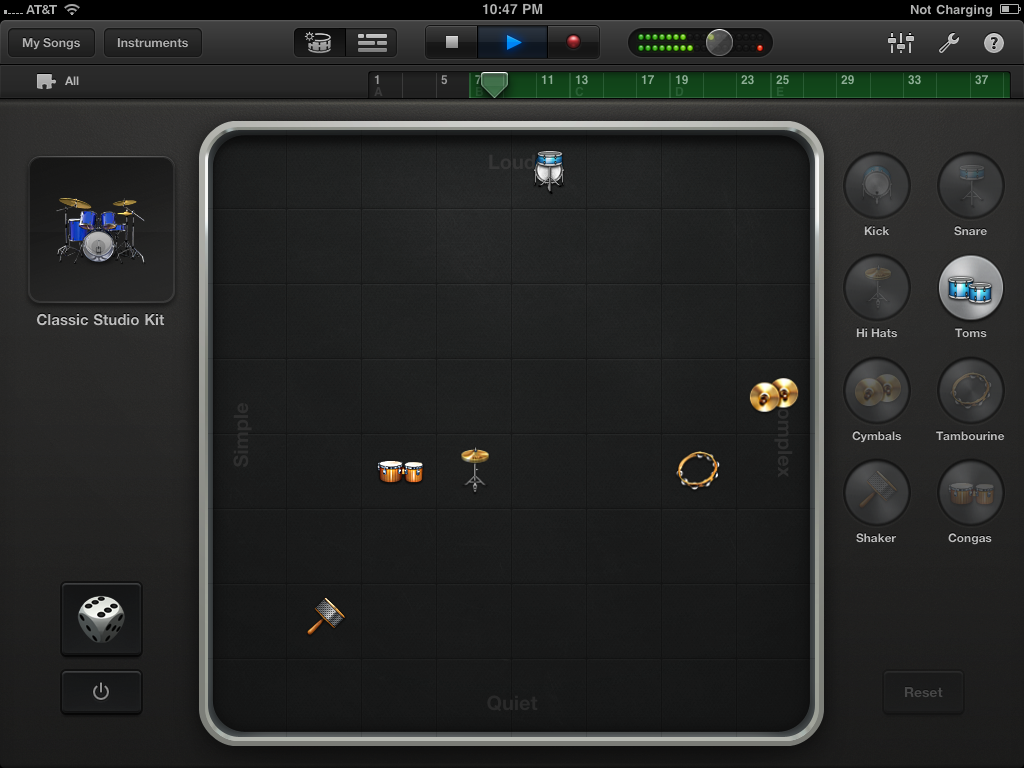 But the impressiveness of the interface is only half of why GarageBand for iPad is so great. The other half is that Apple has proven that the whole of the iPad is greater than the sum of its parts. It isn’t that the GarageBand keyboard has better sensitivity and sound than Pianist (though it does), or that the virtual guitar is easier to use than Air Guitar (though it is), or that the beat sequencers are easier to use than Korg’s iElectribe (though they are), or that the drums sound better than those of JamPad (though they do), or that the recording interface is smoother than FourTrack’s (though it is). It’s that all of these things are now integrated perfectly into part of a larger whole. It is an all-in-one-piece music creation suite, and it is the most capable one on the market.

The closest competition it has is the Boss Micro BR, which trails far behind in several respects. GarageBand is easy and intuitive to use while the Micro BR’s functionality is arcane; GarageBand supports eight tracks while the Micro BR supports only four; GarageBand provides several virtual instruments while the Micro BR provides none. The Micro BR is smaller (5.5”x3.25x0.875”), which makes it slightly more portable, but this also contributes to its poor usability. My Micro BR has served me well for years. Tomorrow it goes up on Craigslist. 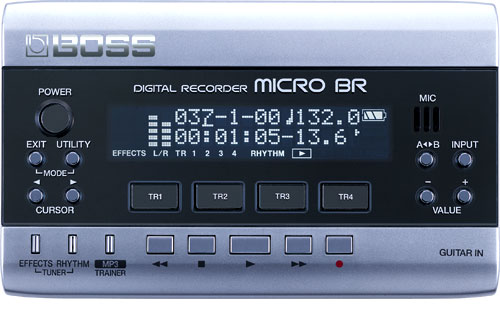 I’d like to see an input level adjustment in the next version. Controlling individual track volumes at playback time is not sufficient for this purpose, especially for songs that vary from quiet vocals to loud, distorted guitars.

A more traditional drum machine interface (with individual tracks for each drum laid out on a timeline) would be helpful for creating drumbeats that exist in my head. The touch sensitivity of the on-screen drumset is impressive but imperfect. It’s frustrating to get through 14 out of 16 measures and then miss a beat.

The condenser mic in my iPad (again, first generation) is acceptable, but leaves something to be desired, particularly on the high end. I don’t know if this mic has been upgraded in the iPad2, but something of higher quality would be much appreciated. In the mean the Blue Yeti is an excellent USB microphone, and works with the camera connection kit. Obviously, this makes the setup much less portable.

A Note on iPad vs iPad 2 Performance

GarageBand’s performance on my first generation iPad was noticeably but not painfully sluggish. The most frequent lag occurs when switching between the track and recording screens. It lasts for about one second.

There is another lag, longer in duration but less frequent in occurrence, that I ran into seemingly arbitrarily. A box will pop up that says “Optimizing Performance” and you will have to wait 15-20 seconds while it chugs along. I encountered this four or five times over the course of two hours. I suspect what GarageBand is doing is loading audio content into and out of RAM. If that’s the case, then performance should be better on the iPad 2, which has 512MB as opposed to the 256MB of the original.

GarageBand for iPad is the most complete and capable all-in-one music creation package available anywhere. It’s fun, it’s easy, and it’s effective. At $4.99, it has replaced my $220 Micro BR.